Santa Fe, NM—The New Mexico Department of Cultural Affairs and the state Transportation Department have created a partnership to mobilize the New Mexico History Museum more than six months before its scheduled public opening in May 2009.

A History of Travel in New Mexico, an exhibition focusing on the state’s complex history of transportation, has been touring the state on the Van of Enchantment since the fall of 2008. The Department of Transportation awarded DCA $617,250 to curate, design, and tour this three-year exhibit.  It has been stopping in schools and communities throughout New Mexico, and will help raise awareness for the long-awaited new institution, says the museum’s director, Dr. Frances Levine.

“The new History Museum is and will continue to be far more than a beautiful building on the north side of Santa Fe’s Plaza,” said Cultural Affairs Secretary Stuart Ashman. “The museum will truly have a statewide presence, serving all New Mexicans. This unique collaboration with the Transportation Department for a traveling history exhibit is another indication of that philosophy.”

“Transportation is one of the key themes in the history of New Mexico. Foot paths and ox-carts, royal roads and super highways, railroads and now the spaceport are more than simply a way to connect distant places,” said Levine. “They connect people with different ideas, resources and products. Through time, people have connected in different ways following these networks.”

The first installment of the exhibit, Trails and Tales will cover prehistoric and indigenous trails, such as the roads surrounding Chaco Canyon.  The program will point out how cultures were linked along trade routes.

The second installment of the “exhibit on wheels” will be called Riding the Rails and will focus on the railroad and the impact it had on New Mexicans’ lives. The final exhibition will be Road Trips and will study the legacies of Route 66, I-10 and I-40.

Teachers and community members interested in participating in the van program can contact the Van’s Coordinator and Educator, Amanda Lujan at 505-476-1164 or  by email at amanda.lujan123@state.nm.us.

Educational programming and curricula for teachers to share as classroom activities and parents to share at home has been developed.

This is not the first time that Cultural Affairs and the Transportation Department have partnered on an exhibition. In 2004 Transportation’s highway archaeology program commemorated its golden anniversary with Roads to the Past: 50 Years of Highway Archaeology, an exhibition at the Museum of Indian Arts and Culture. The state’s Traveling Exhibitions Program (TREX) distributed a traveling model of the exhibition. It was so popular that a Roads to the Past interactive module was installed on the Van of Enchantment for further outreach opportunities.

The Van of Enchantment’s outreach mission is to promote public awareness of the role of the State of New Mexico’s museums and monuments as stewards of the state’s cultural heritage, and to create an ongoing relationship between the state museums and monuments with the people of New Mexico. This mission is maintained and nourished through a number of actions, including collaboration and partnership with Department of Cultural Affairs and other state and community agencies, traveling to each of the 33 counties of the State of New Mexico with one or more outreach programs, gathering new cultural information from New Mexicans through outreach activities, and maintaining an interactive and informative website that encourages return visits on a regular basis. Admission is free. 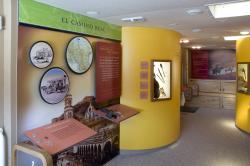 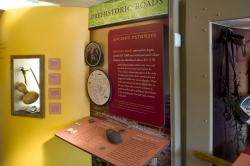 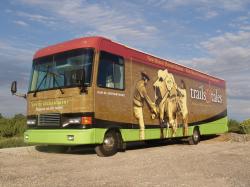