In the early 1700s, Spain’s northern colony sat at the edge of a frontier that could be fraught with danger. Inside the Palace of the Governors at the New Mexico History Museum, visitors can see examples of what happened when explorers set out on that frontier. The Segesser Hide Paintings depict two such adventures on a grand scale—a total of roughly 137 square feet of what is likely bison leather painted with natural pigments.

“The Segesser hides are a rare and important artifact of our collection, not only because of what they show but because of what they are,” said Dr. Frances Levine, director of the New Mexico History Museum. “The expeditions depicted on the Segesser hides likely began at the front door of the Palace of the Governors, so we like to think that the hides truly came home to us.”

How they returned is a tale as circuitous as it was fortuitous. Philipp von Segesser von Brunegg, a Jesuit priest stationed in a village of Sonora, Mexico, acquired them from a family there that was prominent in military and civil affairs. In 1758, the priest sent the hides to his family in Switzerland, where they stayed in relatively obscurity. In 1983, another museum inquired about borrowing them for an exhibition only to learn they could be purchased. Supporters of the Palace of the Governor heard about that and sprang into action, raising state and private funds and carrying out international diplomacy to “Save Our Hides,” as their campaign was called.

Main sections of the hides were acquired, though a few small pieces have yet to find their way from Switzerland to Santa Fe. With the hides securely on long-term display, the History Museum turned toward bringing them into the 21st century with two tools:

* A computer interactive in the museum's main exhibition, Telling New Mexico: Stories from Then and Now allows visitors to take a virtual 'tour" of the hides and also click on various parts to learn more about what is believed to have been happening in them. The interactive is also available online by clicking here or logging onto http://www.nmhistorymuseum.org/hides/.

* A short documentary film, produced in partnership with KNME-TV, Albuquerque's PBS station. Narrated by former Palace of the Governors Director Thomas E. Chávez, a Segesser Hides scholar, the film can be viewed online by clicking here or logging onto http://www.newmexicopbs.org/productions/momentsintime/segesser.php.

“The tradition of hide paintings was important to the art of New Mexico and also served a part of the economy, as paintings were exported to Mexico for sale,” said Josef Diaz, curator of Southwest and Mexican Colonial Art and History Collections at the museum. “Besides being the only know surviving hides that depict a narrative, the Segessar hides are an important testimony of battles in the early history of the United States. They serve as documents for the study of clothing, weaponry, ethnography and European and Native American alliances

Segesser I shows an encounter between rival tribesmen, with the attackers possibly accompanied by a Spanish leader. Because the painting shows hills, cliffs, deciduous trees, bison, deer and pumas, scholars assume it took place over varied terrain. Where that terrain might be remains unknown, along with precisely who the fighters are and when the event happened. Among the theories are that it depicts Pueblo Indians and Plains Apache Indians; such skirmishes occurred between 1693 and 1719 in expeditions from the Palace.

Segesser II depicts the disastrous 1720 rout of Spanish troops and their allies in present-day Nebraska. New Mexico Gov. Antonio Valverde y Cosio had dispatched the troops from the Palace after hearing about encroachments by the French. Upon encountering a large Pawnee Indian encampment, Lt. Governor and Commander-in-chief Pedro de Villasur attempted to initiate a dialogue. The effort failed, and the expedition retreated, only to be attacked by Pawnee and Oto Indian allies the next morning. The painting includes 37 French soldiers firing long arms at the Spanish expedition.

Some scholars believe the hide paintings were created in New Mexico, where imported canvas was rare and processed hides were commonly used for reposteros, or hide paintings, that were exported to Mexico. Because the paintings show several distinct styles, some scholars think as many as three artists painted various details—likely indigenous New Mexicans with tribal affiliations who had the benefit of eyewitness descriptions and were taught European painting techniques. Other scholars believe that the paintings were produced in workshops in Santa Fe by Spanish craftsmen who were descendants of participants in the battle.

“Spain’s role in the development of the Americas has too often been overlooked in history books and classrooms,” Levine said. “We hope visitors who come here will use artifacts like the Segesser Hide Paintings to re-orient their thinking about the American West and the enormous contributions of Spain, from the earliest explorers to the Revolutionary War.” 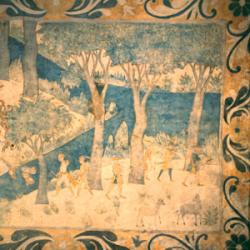