Between the Lines: Culture and Cartography on the Road to Statehood

From a Spanish government that never quite knew where to draw its northern colony’s borders to a Mexican government that disagreed with where the lines eventually were drawn to a Texas Republic that wanted to claim the Rio Grande, Santa Fe, and much of eastern New Mexico, the U.S. government eventually managed to carve out the trusty rectangle we now know as New Mexico.

Between the Lines: Culture and Cartography on the Road to Statehood in the Governor’s Gallery is part of the state’s 2012 Centennial celebration. The exhibition explores how cartographers interpreted New Mexico’s land, its physical and political boundaries, and the cultural minglings of Native, Spanish, Mexican, and American people.

Between the Lines: Culture and Cartography on the Road to Statehood opens Thursday, January 5 and will be on view through May 4, 2012, in the Governor’s Gallery on the fourth floor of the state Capitol. The Women’s Board of the Museum of New Mexico will host a public reception from 4-6 pm on January 5. The gallery is free and open to the public.

“This exhibition looks back six centuries tracing New Mexico’s history, culture and politics through its geography,” said Merry Scully, curator of the Governor’s Gallery. “The maps on view are interesting, beautiful and educational. I am happy to open this exhibit as we begin our year-long celebration of statehood. I am sure these maps  will be a delight for the many students, visitors and legislators who come from across the state to the Roundhouse during the legislative session.”

Drawing on maps from outstanding public and private collections, including the New Mexico History Museum’s Fray Angélico Chávez History Library, the exhibition contains hand-drawn and printed maps from 1564 to the present day.  The maps demonstrate both their utility and appeal as art objects. Each map is accompanied by text highlighting its significance.

Curated by Dennis Reinhartz, noted historian and Professor Emeritus at the University of Texas at Arlington, and Tomas Jaehn, librarian at the Fray Angélico Chávez History Library, this exhibition represents a collaboration between the New Mexico Museum of Art and the New Mexico History Museum. The maps on exhibit include:

An 1847 lithograph of the Territory of New Mexico done by W. H. Emory, a major in the U.S. Corps of Topographical Engineers, who mapped the Southwest from 1844 into the Civil War. The information he included on this particular map proved useful in the Mexican-American War and helped establish New Mexico’s future territorial boundaries.

An 1851 lithograph of the Western Territories by E. Gilman, a draftsman for the publisher Duval, that erroneously includes the New Mexican lands east of the Rio Grande as part of Texas (a claim of ownership that Texas would cling to until New Mexico became a state in 1912).

A Rand, McNally and Co. lithograph from 1893 showing the arrival of the Atchison, Topeka and Santa Fe Railway—and a few liberties the railway took to attract tourists.

A 1936 Standard Oil map published the M.H. Gousha Co. that celebrates the “Mother Road,” Route 66. Back then, gas-station maps were given away free with tips on recreational activities and points of interest.

A three-dimensional map that encourages visitors to trace the outlines of New Mexico’s mountain ridges and river valleys.

Besides charting land features, cartographers in their own way chronicle our history. They help people define who they are, where they are, and how they move about. The story of New Mexico’s shifting boundaries reveals the places where those interests blended as well as clashed.

Download high-resolution images of maps in the exhibit by clicking on "Go to Related Media," above, left.

Information for the Public:

The Governor’s Gallery is located on the fourth floor of the State Capitol at the corner of Old Santa Fe Trail and Paseo de Peralta in Santa Fe, NM.  For more information call 505-476-5072 or visit www.mfasantafe.org 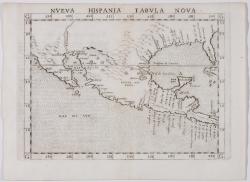 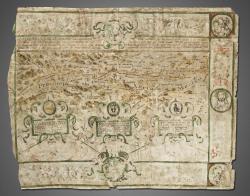 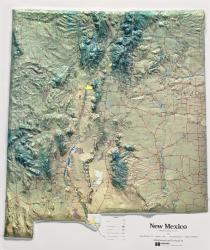 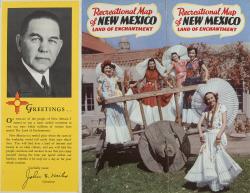 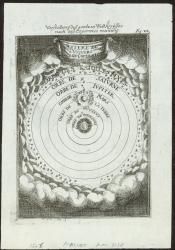 Presentation of the World Circle 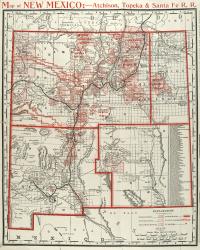 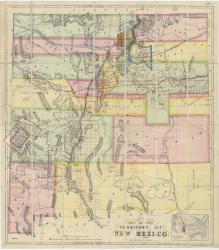 1873 Map of the Territory of New Mexico 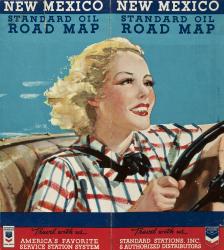 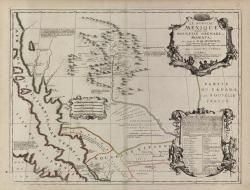