Enjoy a special presentation by one of the world’s foremost calligraphers, Donald Jackson, artistic director of The Saint John’s Bible and senior scribe to Her Majesty Queen Elizabeth’s Crown Office at the House of Lords.

“Donald Jackson: Illuminating the Word,” will be held on Monday, Nov. 7, at 6 pm, at the Lensic Performing Arts Center in downtown Santa Fe. Tickets are $15. A private reception following is $50. Tickets are available at www.ticketssantafe.org or (505) 988-1234.

Illuminating the Word: The Saint John’s Bible, on exhibit at the New Mexico History Museum through April 7, represents Jackson’s crowning achievement—the fulfillment of a goal he began nurturing as a young boy. Jackson oversaw a team of scribes who handwrote and illuminated every page of the Bible on behalf of the Benedictine monks at Saint John’s University in Collegeville, Minn. The project was completed this fall; after the History Museum’s exhibition of pages from the Wisdom Books and Prophets volumes of the work, the pages will be bound and placed in the care of the monastery.

Download high-resolution images of Donald Jackson and of pieces from the exhibition by clicking on "Go to related media" at the top left of this page.

Jackson began developing sketches that led to the project while at a Ghost Ranch workshop in northern New Mexico. In 1996, he took to Saint John’s Abbey an idea about collaborating on a millennium-worthy project, which was officially commissioned in 1998. By March 8, 2000, Jackson was able to pen the project’s first words on a page of vellum: “In the beginning was the Word, and the Word was with God, the Word was God ...” On May 9, 2011, he wrote the final word, “Amen.” The pages were publicly unveiled in September.

“Now that I have inscribed the final Amen,” Jackson said in a prepared statement for the event, “I realise that over the long years of this task, a boyhood dream, I have gradually absorbed an enduring conviction of the pin-sharp relevance of these ancient Biblical Texts to the past, present and the future of our personal and public life and experience. These texts have a life of their own and their life is a mirror of the human spirit and experience.”

Jackson created a script specifically for the project that was then learned by each of the scribes who worked on it. Mixing techniques used in creating ancient illuminated manuscripts with the modern technology of computers to plan the layout, the work reveals a modern interpretation of biblical traditions. Viewers will spy chain-link fencing, DNA models, people of many races, and imagery from a variety of faiths.

At the age of 20, Jackson was appointed a visiting lecturer at the Camberwell College of Art in London. Within six years, he was appointed a scribe to the Crown Office at the House of Lords. As a scribe to Her Majesty Queen Elizabeth II, he was responsible for the creation of official state documents and, in 1985, was decorated by the Queen with the Medal of The Royal Victorian Order, which is awarded for personal service to the sovereign. Jackson is an elected fellow and past chairman of the Society of Scribes and Illuminators and, in 1997, was named master of the 600-year-old Guild of Scriveners of the city of London. He is the author of The Story of Writing and has trained and encouraged many of America’s top calligraphers.

In Monmouth, Wales, Donald and Mabel Jackson live in a converted village hall—a rambling building, beautiful against the hills that surround it. Across a small road, the “schoolroom,” a converted mechanic’s shed, was renovated into a scriptorium, full of natural light. From there, Jackson oversaw The Saint John’s Bible with a team of skilled scribes, some who worked there and others who took pages of vellum back to their own studios.

Their finished project is the first handcrafted Bible commissioned by a Benedictine abbey in more than 500 years. Handwritten and illuminated on calfskin vellum using quills, hand-ground pigments, natural inks, and gold-leaf gild, the Bible contains more than 160 illuminations and countless text treatments and marginalia in seven distinct books: Pentateuch, Historical Books, Psalms, Wisdom Books, Prophets, Gospels and Acts, and Letters and Revelation. For more information on the project, go to http://www.saintjohnsbible.org/. 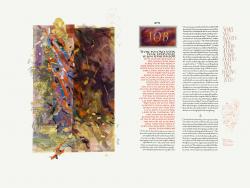 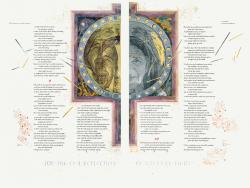 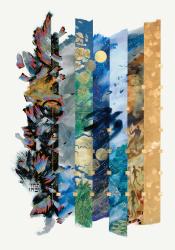 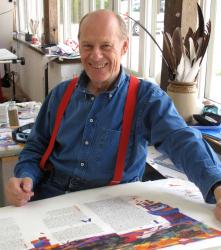 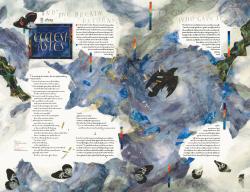 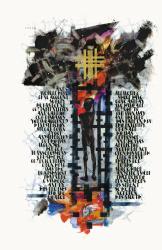