The ballet performance will take place from April 22-24 at NHCC’s Albuquerque Journal Theatre. Shows begin at 7 p.m. on Friday, April 22 and Saturday, April 23, and at 2 p.m. on Sunday, April 24. Tickets are available at https://www.nhccnm.org/event/sacred-journeys-iii/.

“I’m proud to be part of this production sharing what is uniquely New Mexico culture as well as being at the forefront of cultural community artistic expressions,” Mirabal said.

Soto and Mirabal each bring a unique cultural background to the performance. Mirabal, dedicated to keeping alive the centuries-old customs of Taos Pueblo, is also a leading proponent of world music, and has merged his Indigenous American sound with the music of Africa, Asia, and the Caribbean, tapping into a planetary pulse with a style that defies characterization. His 2002 breakthrough PBS special, Music from a Painted Cave, is unsurpassed in Native American theatrical expression.

Soto, meanwhile, comes from Navajo and Puerto Rican descent and was born in Gallup. A former principal dancer with the New York City Ballet, Soto was one of the last dancers to be personally selected by founder George Balanchine when he was barely 16.

He danced featured roles in over 40 ballets, of which more than 35 were created for him. The author of Every Step You Take and the subject of the documentary Water Flowing Together, Soto teaches partnering and technique classes at the School of American Ballet, where he has been a permanent member of the faculty since 1996. Soto will be making a special cameo during the performance.

“I wanted to bring that sort of New York City experience to this production,” Soto said.

Tickets range from $14 to $49, with a $2 discount for seniors, children under the age of 12, and NHCC members. For more information on the event, please visit www.nhccnm.org.

About the National Hispanic Cultural Center

The National Hispanic Cultural Center is dedicated to the preservation, promotion, and advancement of Hispanic culture, arts, and humanities. The NHCC presents mission-related events throughout the year, some produced by its history, literary, performing, and visual arts programs, and others by partnering with external organizations. Events take place at its 20-plus-acre campus, which includes a plaza, an art museum, a historically designated building, a library, and a genealogy center. The NHCC is a division of the New Mexico Department of Cultural Affairs and is further supported by the National Hispanic Cultural Center Foundation. 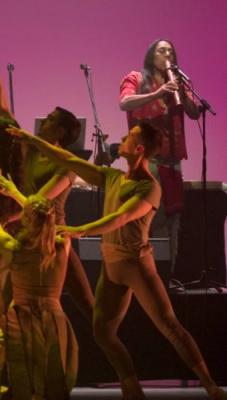