(Santa Fe, New Mexico) – Work will begin the first week of February on the New Mexico Museum of Art Vladem Contemporary. The initial step of the construction project is the removal of the Halpin Building annex, a portion of the main building, followed by required archaeological survey investigations.

On Monday, January 27, 2020, construction fencing will be erected around the site, before removing the annex. This fencing will be covered by landscape fabric to protect foot traffic, vehicles on nearby South Guadalupe Street, and neighbors from debris and blowing dirt. Fencing will remain in place through construction.

The annex, which extends from the south end of the original Ilfeld Warehouse to Garfield Street, was originally constructed for warehouse and then modified for State Archive purposes. Ultimately, portions of the New Mexico Museum of Art Vladem Contemporary will be built in this location, but the removal of the annex at this time is necessary for the archaeological work that must be completed prior to construction. After the removal of the annex, the New Mexico Office of Archaeological Studies (OAS) will conduct archaeological investigations.

“Due to the rich history of the city of Santa Fe, archaeology must be considered as part of construction projects,” said OAS Director Eric Blinman. “City preservation ordinances call for examining at least two percent of the lot area, usually with backhoe trenches, followed up by hand excavation if buried sites are discovered. Archaeologists monitor the trenching, looking for artifacts and features that indicate the presence of any earlier occupations.”

Prior archaeological research in the vicinity of the New Mexico Museum of Art Vladem Contemporary has encountered few traces that predate the 1880s when the railyard was first established. Historic maps indicate that this portion of Santa Fe was devoted to fields and that the earliest railyard uses of the area were for coal stockpiles. After the coal yard was moved in 1936, the Charles Ilfeld warehouse was built. In 1960, the warehouse was sold to the state of New Mexico and remodeled into the Joseph C. Halpin Records and Archives building. It served that purpose until the new Records and Archives building was completed on Camino Carlos Rey.

The demolition and removal of the annex will take a week to complete, archaeological investigation work is planned for approximately three weeks, and construction is expected to begin in late spring 2020.

The New Mexico Museum of Art Vladem Contemporary is slated to open in late 2021.

Founded in 1917 as the Art Gallery of the Museum of New Mexico, the New Mexico Museum of Art has presented innovative arts programming in downtown Santa Fe for more than a century. Known for its tradition of collecting and exhibiting works by noted artists from New Mexico and around the world, the Museum of Art continues to bring the art of New Mexico to the world and the art of the world to New Mexico. The NM Museum of Art Vladem Contemporary, slated to open in late 2021, will expand the Museum’s capacity as a second location within a single institution. While continuing to build its collection, the Museum will stage broader, more comprehensive exhibitions, elevating its reputation and visibility to a national and international level. Other improvements include amenities for artists in residence, bolder education and outreach programs, and lively public spaces.

Museum exhibitions and programs are supported by donors to the Museum of New Mexico Foundation and its Director’s Leadership Fund and Exhibitions Development Fund. NM Museum of Art Vladem Contemporary is a result of the Foundation’s $12.5 million Centennial Campaign.

Events, news releases, and images about activities at the New Mexico Museum of Art and other in divisions of the Department of Cultural Affairs can be accessed at media.newmexicoculture.org. 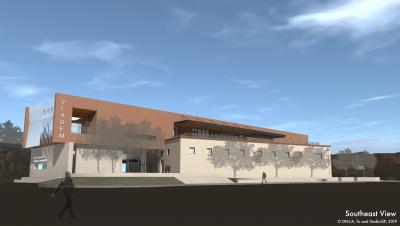