Due to the enormous popularity of the Jemez Historic Site’s breath-taking and beloved annual holiday event, Light Among the Ruins has been expanded to two nights: Saturday Nov. 30 and Dec. 14.

During the event, the ruins of Giusewa Pueblo and San José de los Jemez Mission will be decorated with hundreds of farolitos. Each evening’s program will include traditional Native American flute music and Jemez Pueblo dancers’ performing between two illuminating bon-fires. The Historic Site will also host an arts and crafts fair and have food available for purchase.

Tickets on are on sale now: Adult $15 and Children (16 & under) $7.50. Visit http://www.nmhistoricsites.org/jemez to purchase your tickets.

In addition to covering the cost of hosting Light Among the Ruins, any additional funds collected beyond expenses will help provide for preservation, future exhibits and programs at the Jemez Historic Site.

Flash photography, drones, firearms and alcohol are prohibited. The event will go on regardless of the weather. No refunds.

Shuttles will be available to and from the Jemez Historic Site to parking locations in the Village of Jemez Springs. Those planning on walking to and from the event are encouraged to bring a flashlight and wear reflective clothing.

Jemez Historic Site is located at 18160 Highway 4 in Jemez Springs, New Mexico, and is open Wednesday through Sunday from 8:30 a.m. to 5 p.m. Admittance is $5.00 per adult. Children and Jemez tribal members are free. For more information call 575-829-3530 or visit http://www.nmhistoricsites.org/.

About Jemez Historic Site: A short drive from Albuquerque and Bernalillo, the Jemez Historic Site is one of the most beautiful prehistoric and historic sites in the Southwest. It includes the stone ruins of a 500 year old Indian village and the San José de los Jemez church dating to 1621/2. The village of Giusewa was built in the narrow San Diego Canyon by the ancestors of the present-day people of Jemez (Walatowa) Pueblo. The name Giusewa refers to the natural springs in the area.

In the 17th century, the Spanish established a Catholic mission at the village. The mission was short-lived, and, in time, the people abandoned the site and moved to the current location of Jemez Pueblo. The massive stone walls were constructed about the same time the Pilgrims landed at Plymouth Rock. The heritage center contains exhibitions that tell the story of the site through the words of the Jemez people. A 1,400-foot interpretive trail winds through the impressive site ruins.

In 2003, the J. Paul Taylor Family bequeathed the Taylor-Barela-Reynolds House and Property on the Mesilla Plaza to the Department of Cultural Affairs.  Still serving as J. Paul Taylor’s private home, the property will become a Historic Site after his passing. Events, news releases and images about activities at New Mexico Historic Sites, and other Department of Cultural Affairs divisions can be accessed at http://media.newmexicoculture.org/. 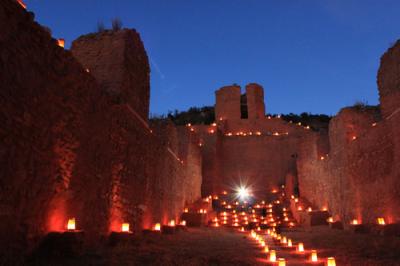