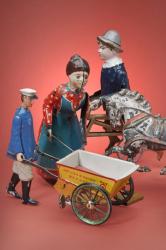 From the press release:
Come Out and Play: The History Museum’s 5th Birthday Bash

The toys reflect types from the early 20th-century that were becoming increasingly popular across the United States and available more widely throughout New Mexico due to the railroads gaining access to the region.