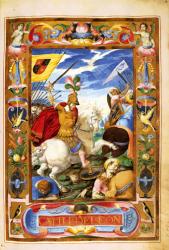 In this patent letter, imagery of the religious devotion of the family is abundantly apparent. Often, letters would single out important historical events, such as the Reconquista (the Spanish Catholic Reconquest of the Iberian Peninsula from the Muslims), to communicate a family’s involvement in the endeavor. St. James the Moor Slayer (Santiago de Matamoros) is depicted on his traditional mount, a white horse, as he tramples a Muslim to death. Again, the visual language of the illumination speaks to the family’s interest in promoting their religious devotion, and in some cases, their fervent belief in the eradication of other faiths such as Islam.

Illuminated patent letters such as this one relayed the pedigree of the family. An important aspect of one’s patent letter would include the family’s heraldic crest. Older noble families typically had crests with less detail, for example a simple shield with a bar, whereas newer noble families included more symbols. It was rare for converso families to have simple coats of arms as their families lacked old Christian pedigree.

This image is made available to media for use in promoting exhibitions and events at the New Mexico History Museum and Palace of the Governors. Permission is required for all other uses; reprint fees may apply. Contact emily.brock@state.nm.us.