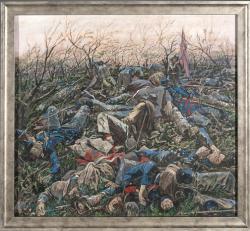 With thousands of memorials and annual battle reenactments, remembering the Civil War has become part of our national practice. In 1961, Life Magazine commissioned several artists to reflect upon and represent the most iconic battles for a Civil War Centennial issue. One of those artists was Isa Barnett, an established graphic artist who served in World War II and later lived in Santa Fe. Barnett used photographs and live models and worked closely with historians to ensure that weapons, uniforms, and gestures were authentic for this gritty scene in the Battle of Shiloh. Such illustrations influenced a new generation of Civil War art that flourishes today.