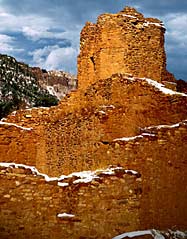 A short drive from Albuquerque and Bernalillo, the Jémez Historic Site Heritage Area is one of the most beautiful prehistoric and historic sites in the Southwest. It includes the stone ruins of a 500 year old Indian village and the San José de los Jémez church dating to 1610. The village of Giusewa was built in the narrow San Diego Canyon by the ancestors of the present-day people of Jemez (walatowa) Pueblo. The name Giusewa refers to the natural springs in the area.

In the 17th century, the Spanish established a Catholic mission at the village. Mystical and massive, with walls eight feet thick, the San Jose de los Jémez Mission rises in the center of Giusewa Pueblo, saturated with pueblo rituals and Catholic rite. Smaller buildings surround, crumbled footprints of the 700-year-old pueblo and the Spanish ocupation here from 1621-1680. The mission was short-lived, and, in time, the people abandoned the site and moved to the current location of Jémez Pueblo. The massive stonewalls were constructed about the same time the Pilgrims landed at Plymouth Rock.

The Heritage Center contains exhibitions that tell the story of the site through the words of the Jemez people. A 1,400-foot interpretive trail winds through the impressive site ruins, shedding light on its history. Knowledgeable rangers are on duty to answer questions and offer interesting insights. Lodging and food are available in Jémez Springs.