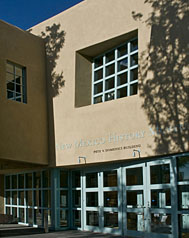 The New Mexico History Museum sweeps across five centuries of stories that made the American West – from early Native inhabitants to Spanish colonists, Santa Fe Trail riders, outlaws, the railroad, artists, scientists, hippies and more. This 96,000-square-foot building became the state’s newest museum in May 2009, joining its oldest, the 400-year-old Palace of the Governors (the nation's oldest continuously occupied government building and a National Historic Landmark).

Born from the need for a state-of-the-art storage facility, the History Museum evolved into a first-class museum project, spurred by the national rethinking of the role history museums play in communities. No longer attics or basements full of long-forgotten objects, they are now places that partner in education, civic engagement, and social change.

The History Museum strives to forge identity and community through an understanding of who we were as well as what we have become. New Mexico’s confluence of cultures and individuals has molded the social, political, economic, artistic and spiritual nature of its communities. Using dynamic technology, including computer interactives, films, oral histories and more, we give voice to generations of New Mexicans, inviting visitors to form personal bonds and engaging them in the museum's interwoven storylines.

Few states have the time depth and cultural breadth of New Mexico. Most people are taught that America's colonial history began with the settlement of Jamestown, or when the Pilgrims landed at Plymouth Rock. The History Museum provides another point of view, framing the story of America within a broader cultural perspective that recognizes contributions by Spanish, Mexican, Pueblo, Navajo, and Apache peoples.

Augmenting the museum's 3½ levels of artifacts, photos, paintings, maps and more are vibrant lectures, hands-on workshops and performances that complement the museum experience. In this museum, visitors become players in a "theater" of understanding – giving them an enhanced connection to stories that resonate with humanity, passion, and relevance. Simply put, this museum is changing the way that Americans think about their national history.

Looking Back: Reflecting on Collections Traces Evolution of Collections

“Headed into the Wind: A Memoir” Book Talk & Signing with Jack Loeffler

Las Posadas Reception Relocated to Portal of Palace of the Governors

More than Footprints: An Archaeological Hike on the Moon