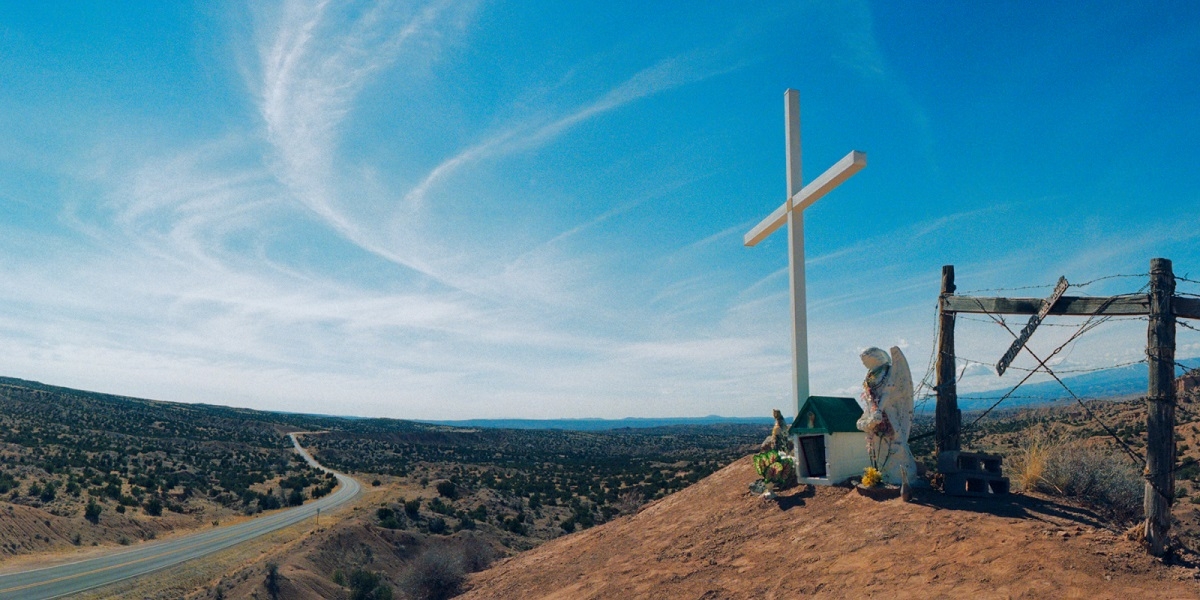 Hallowed ground abounds across New Mexico’s landscape. Whether it’s a mountaintop sacred to Pueblo people, a backyard shrine built by a Spanish descendent, or a “ghost bike” set up in memory of a fallen bicyclist, people of many backgrounds have found the need to invest places with their prayers and devotion.

Altared Spaces: The Shrines of New Mexico (September 30, 2012, through February 10, 2013) reveals how three New Mexico photographers interpret those places. Featuring the work of Siegfried Halus, Jack Parsons, and Donald Wooodman, Altared Spaces will be in the second-floor Gathering Space of the New Mexico History Museum. The photographers’ work augments images in the exhibition Contemplative Landscape and Illuminating the Word: The Saint John’s Bible.

Download high-resolution images from the exhibit by clicking on "Go to related images" at the bottom of this page.

The photographers kick off the exhibit on Sunday, September 30, with a 2 pm discussion of their work in the History Museum auditorium, followed by refreshments in the Gathering Space, courtesy of the Women’s Board of the Museums of New Mexico. The event is free with museum admission; Sundays are free to NM residents. (And parking is free in downtown Santa Fe on Sundays.)

Guest curator Mary Anne Redding selected images for Altared Spaces that reveal a variety of custom-made shrines bearing profound personal meaning that meld seamlessly and artfully into their surroundings. For the photographers, that connection is personal as well.

In Austria, where Siegfried Halus lived until he was eight, shrines with images of Jesus, the Virgin Mary, and other religious figures are posted at crossroads and roadsides. Halus’s mother was Catholic, his Romanian Orthodox father a liturgical sculptor who relocated his family to Philadelphia in the early 1950s. Halus apprenticed with his father as a wood carver before earning a graduate degree in sculpture. Moving to Santa Fe in 1989, he found common ground in Hispano traditions of shrines and saint making and, with author and santera Marie Romero Cash, created the book Living Shrines: Home Altars in New Mexico, published by the Museum of New Mexico Press.

“In New Mexico, shrines help people maintain their religious history and traditions,” Halus says. “They not only express individual spiritual relationships, they tell stories of how people live and have lived.”

Halus is former director of the art department of Santa Fe Community College. With photographer Greg Mac Gregor, he recreated the 1776  Dominguez and Escalante Expedition for the book In Search of Dominguez & Escalante: Photographing the 1776 Spanish Expedition Through the Southwest, published by the Museum of New Mexico Press.

Shrines have been a part of Jack Parsons’ photographic journey through New Mexico for more than 35 years. As sacred spaces for religious contemplation or secular expressions of highly individual meaning, shrines appeal to his eye and imagination for the creative process that links familiar objects to acts of personal devotion and meaningful moments in time.

“Photographing shrines is a slight invasion of privacy, but I appreciate their aesthetic value,” Parsons says. “They are artful even if they are crude. They are visual touchstones for things that are meaningful in our lives.”

Parsons has published more than a dozen books, pioneering the "lifestyle" genre with Rizzoli’s international best-seller Santa Fe Style, which has been followed by numerous best-selling volumes on art, décor and culture. With Carmella Padilla, a fellow recipient of the New Mexico Governor’s Award for Excellence and Achievement in the Arts, Parsons created both The Chile Chronicles and El Rancho de las Golondrinas.

For more on Parsons, go to his website, http://www.jackparsonsdigital.com/.

As a photographer who has explored landscapes worldwide, Donald Woodman also views a shrine as any physical or spiritual destination or pilgrimage site.  While traveling in Europe for a project on the Holocaust, for example, he visited concentration camps, memorials and other markers of human devastation that are shrines to those who experienced the horror. Closer to home, he says, everything from old railyards to the natural wonders of the Navajo Nation to the graves of Billy the Kid or Kit Carson are shrines to the settling of the West.

“In New Mexico, the awe-inspiring qualities of the natural environment draw people from around the world,” he says. “The landscape is a shrine to itself.”

Woodman has photographed New Mexico churches, roadside memorials, and other traditional New Mexican shrines. But he is more intrigued by less familiar subjects—such as The Lightning Field land art sculpture, the Very Large Array astronomical radio observatory, or nuclear history’s seminal Trinity Site—that reflect the inherent allure and reverence of the New Mexico landscape and history. For more on Woodman, go to his website: http://donaldwoodman.com/. 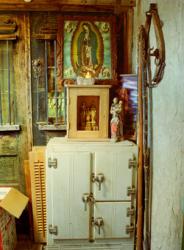 Shrine to the Virgin 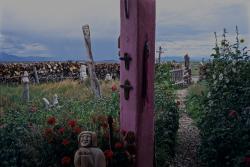 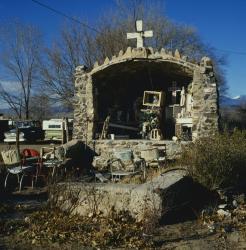 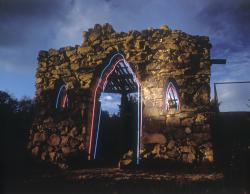 God Is Just a Prayer Away