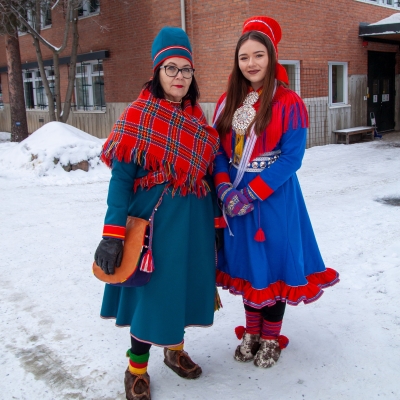 Dec 12, 2021
1:00 PM to 4:00 PM
Dressing with Purpose: Belonging and Resistance in Scandinavia
Join us for the Exhibit Opening with FREE Admission for All!
Museum of International Folk Art


Dress helps us fashion identity, history, community, and place. Dress has been harnessed as a metaphor for both progress and stability, the exotic and the utopian, oppression and freedom, belonging and resistance. Dressing with Purpose examines three Scandinavian dress traditions—Swedish folkdräkt, Norwegian bunad, and Sámi gákti—and traces their development during two centuries of social and political change across northern Europe.

By the 20th century, many in Sweden worried about the ravages of industrialization, urbanization, and emigration on traditional ways of life. Norway was gripped in a struggle for national independence. Indigenous Sámi communities—artificially divided by national borders and long resisting colonial control—rose up in protests that demanded political recognition and sparked cultural renewal. Within this context of European nation-building, colonial expansion, and Indigenous activism, traditional dress took on special meaning as folk, national, or ethnic minority costumes—complex categories that deserve reexamination today. In this exhibition, visitors will be introduced to individuals who adapt and revitalize dress traditions to articulate who they are, proclaim personal values and group allegiances, strive for sartorial excellence, reflect critically on the past, and ultimately, reshape the societies they live in.

Learn more about the companion publication for Dressing with Purpose published by Indiana University Press: https://iupress.org/9780253058577/dressing-with-purpose/

This project is supported in part by the National Endowment for the Arts. Additional support comes from Barbro Osher Pro Suecia Foundation and Swedish Council of America.